15 Incredible Skate Parks that you'll need to see to believe! 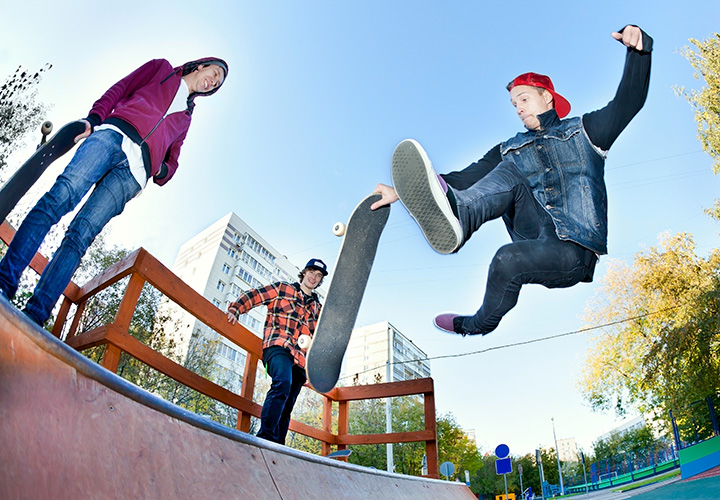 The first skate park in the world was opened in Tucson, Arizona in 1965! The grand opening was presided over by the first Women's National Skateboard Champion at the time, Patti McGee, whose talent helped propel the sport into the national spotlight. Her prominence includes setting a world record for fastest girl on a skateboard and she was the first female inducted into the Skateboarding Hall of Fame. That's quite a few firsts and yes, there is a Skateboarding Hall of Fame.

The sport has seen it's share of peaks and valleys as popularity grew and waned in different parts of the country. Changes in legislation and public perception have helped bring skate parks into the planning process for recreation in public spaces. Skateboarders like to "design and build," which includes working their courses into the landscape and engineering environments to welcome the novice as well as challenge the next national champion. Drop in on some of these skate parks and see which looks the most appealing to you!

Of course California comes to mind when you think of skateparks. The sun can't wait to light the beaches, boardwalks and bike paths and it hangs around until the overheads come on at skateparks like Etnies, (open from 10am until 10pm summer months). Etnies underwent a recent expansion making it one of the largest in the world, with a feel more like an "Oregon-style park with lots of free flow." They also offer classes and camps and ways to help parents embrace the sport as much as their children do.

Alamosa is the largest skatepark in the southwest, with 35,000 square feet of skateable area. It has a street course and two bowls and "all of the modern structures are there for you to grind, scoot and ride." It's an inclusive concrete course, designed for skateboards, inline skates and BMX bikes.

The Burnside is famous for having come to life organically. It sprang forth from the efforts of local skateboarders who commandeered space under the Burnside Bridge in Portland to piece together a skatepark that was eventually sanctioned by the city. Fans of this uniquely staged environment encourage you to go see some "crazy things there" for yourself and also caution that Burnside is "subject to periodic review by the city," so respect and enjoy it and try not to make a nuisance of yourself, even if it is the coolest thing you ever saw.

The Louisville Extreme Park has a new look and a new name. The park became a reality in 2002, thanks in part to the support of then mayor, Dave Armstrong, so when it came time to renovate the park was rededicated with a new name-the Dave Armstrong Extreme Park. It's a 24-hour park known for its 24-foot full pipe and while a section of the park has been rebuilt to accommodate construction on the Downtown Crossing, the park has many modern features that attract skateboarders from all over, including Tony Hawk.

Another park named for a mayor who went to bat for kids, the Jim Griffith Memorial Skate Park in Tigard is fun for skaters of all ages and abilities and has been the site of several competitive events. Located in the parking lot behind City Hall, the skatepark features two large flow bowls, a mini bowl and a concrete T rex Dinosaur. It also has street features and a rotating volcano top.

The Two Rivers Skatepark in Nashville has a number of rules they want you to commit to memory. First and foremost are what is allowed and what is not allowed, including large egos. What are welcome are skateboards, in-line skates, roller skates and BMX bikes equipped with skate-park friendly pegs. What they want you to leave behind are any food or beverages and your penchant for mischief. No matter. You will enjoy your time among three separate skate areas with a deep bowl as well as a mid-sized flow bowl and you're sure to have fun either in the skatepark or the public wave park next door.

Skatopia is more than a skatepark. It's a frame of mind. It was started by professional skater Brewce Martin who shares his philosophy, which was documented in a film called Skatopia: 88 Acres of Anarchy. The 88-acre compound is also used for Woodstock-like music festivals and a yearly Backwoods Blowout, which is the Ohio equivalent of a Burning Man event.

Careful planning went into the design and construction of the Palm Springs Skatepark. Skaters were consulted and involved resulting in a singular environment that incorporates various surfaces as well as replicas of pools found in skatepark designs of the 1970s. The proud people of Palm Springs consider it to be one of the best, if not the best skatepark in California.

Kona State Park is one of the oldest skateparks in Florida. You can pay for lessons and camp and purchase a yearly membership, which brings the daily cost of skating down significantly. Weekly and daily specials offer incentives to drop by and their special Report Card Pass rewards kids who get A's and B's with free skate days. Kona is the host of the annual Bowlriders Cup, which is a gathering of the best all terrain skateboarders for competition and a weekend of family-friendly events and fun.

The Battle Ground Skatepark is a highly-ranked skatepark designed to provide fun for all ages and skill levels. The street course elements include rails, ledges and stepping stones and it has a three-foot bowl that transitions to a one-of-a-kind hooded cradle. The terrain is "well balanced" to attract beginners as well as professionals.

Some of the wildest skateparks are in the state of Oregon, like the Lincoln City Skate Park that was rated one of the "gnarliest" when its first phases were built by Dreamland Skateparks in 1999. The park has grown in the past 15 years and now boasts four separate bowls and a Snake Run, not for the feint of heart. The skatepark is open from dawn till dusk and not supervised, but don't try to skate by without protective headgear (if you're younger than 16).

It was a long time on the drawing board, but the skatepark at Bond Park became a reality this year and has been attracting fans and curious observers since its official opening in September. The mostly concrete with some metal skatepark is now open to skateboarders and BMX riders of all ages and includes more than a dozen features. The skatepark takes the shape of a question mark (maybe in homage to why it took so long to break ground) and has plenty of ramps, ledges and rails for those who like to roll, grind and shred.

Skateboards and in-line skates are what you will find at the Lee and Joe Jamail Skatepark, which was "the first world-class, in-ground skatepark" built in the Houston area. It was designed by Grindline and is a "30,000 square-foot in-ground facility" that brought Houston to the attention of skateboarders all over the nation. The skatepark is conveniently located downtown and is free to the public with areas for all levels, however everyone is required to wear helmets and children under the age of 10 need to be accompanied by an authorized adult.

Pecos offers something for skaters at all levels, from beginners to the more advanced. Skateboarders and in-line skaters will enjoy the flatbars, grinding ledges, blocks, ramps and bowls. They also have a street plaza and pump bumps. The City of Phoenix prohibits bikes and motorized vehicles at all of its skate parks and skateboards longer than 34 inches are also not allowed, but there's no limit to the amount of fun you can have.

Outdoor enthusiasts are attracted to the mile-high city for sports and recreation of all kinds (Denver ranks among the cities with the best park systems in the United States and the Denver Skatepark is no exception. It's an attraction as well as an activity to test your balance and your stamina. With 60,000 square-feet of skateable terrain to cover, the Denver Skatepark offers hours of fun for "boarders, bladers and bikers of all levels." The skatepark is free and open to the public seven days a week.